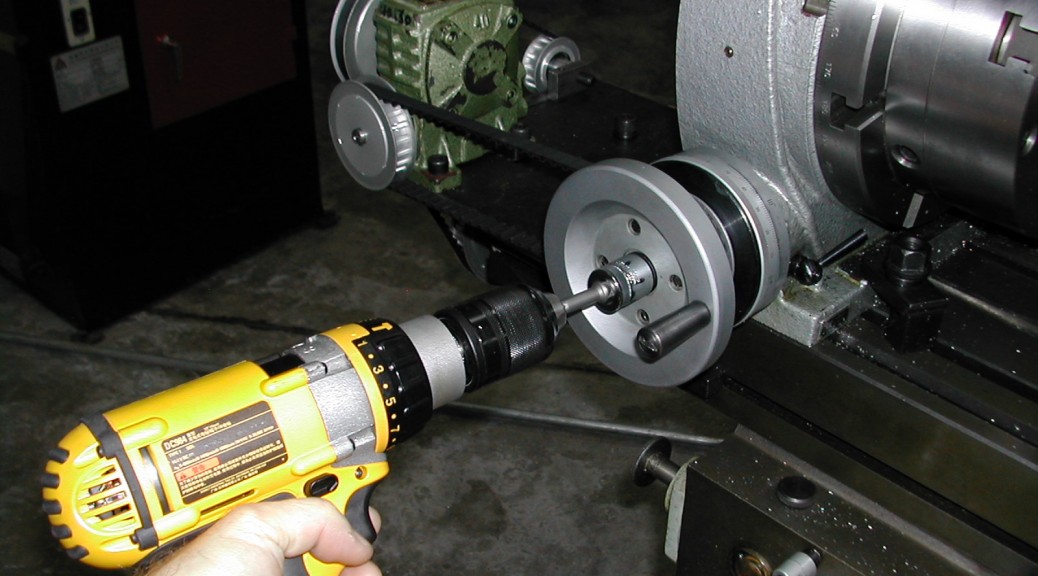 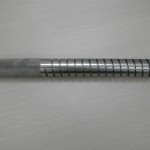 I had a slight problem when making my wheelhead column. I couldn’t find any competent machine shop with a 4-axis CNC mill to run the spiral groove. So, I needed to come up with a way that I could do it myself with the manual machines I had at my disposal. My gearhead lathe couldn’t cut a 2TPI thread so I had to find a way to make this part on the mill.

First was the task of connecting the rotary table to the mill’s X-axis feed screw. I could use a worm-drive gear reducer to turn the corner, but I was still faced with the problem of needing to make a 2TPI groove with a 6mm per turn feed screw on the mill. I guess I could have decided to make the column with a metric pitch, but I wanted my Quorn to be Imperial since it will ultimately end up in the US. 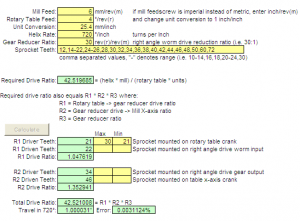 I whipped up a quick Excel spreadsheet (Helix Drive Ratio Calc) to calculate the necessary belt ratios given a 30:1 worm gear speed reducer in the middle. I gave it all the toothed pulley sizes that I could easily get and let it iterate through all the possible ratio permutations. I added the ability to constrain the pulley sizes since I was limited on how large and how small I could go on the pulley that mounted on the rotary table.

The last line on the spreadsheet was good news! I could get more than enough accuracy cutting an Imperial thread using a metric feedscrew. 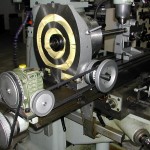 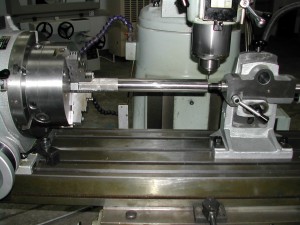 This is a view of the cutting setup. With the belts disconnected, the rotary table is set to 0°, the mill saddle centered under the shaft, and the cutter touched off on the end and the position noted. The X-axis was the backed off a little and the drive belts connected.

Note the knurl on the end of the column. This is to obtain the necessary Loctite film thickness without resorting to a soppy fit in the base casting. 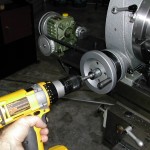 At 4° per turn of the rotary table handle and 15 revolutions of the shaft (actually a little more since I made my shaft about 1″ longer), that’s 1,300 turns per pass – one way (remember you also have to wind it the other way before making the next pass – you can’t disconnect the belt drive until you are finished). That’s a lot of blisters! So it’s the trusty Dewalt cordless drill to the rescue. Before you say “why didn’t he just use the mill power feed”, remember you can’t drive a worm gear backwards, and I’ve got two of them in this system. 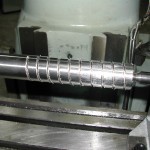 Well, I tried to cut the groove in only two passes. That’s only 0.050″ depth per pass, but it’s also 50% of the cutter diameter, and I’m cutting 440 stainless at 35HRc. I made it this far with my first cutter. I dropped it down to 0.025″ depth per pass, made two half passes to finish the groove from this point, and another two full-length passes.

Each pass took about 15 minutes to cut and another 3 minutes running the drill in full-reverse to get back to the starting point. 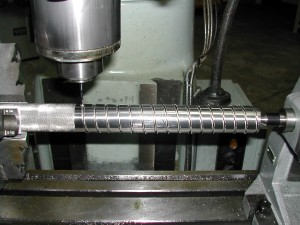 Whew! The spiral groove is finally cut. The rotary table is locked down at this point, and the belts removed. Now I can hand crank the mill table to cut the straight groove. 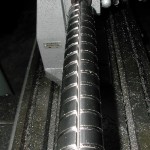 And here’s the vertical groove finished. 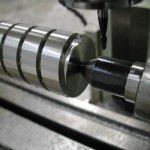 A final touch is removing the flimsy, sharp, run-out at the end of the spiral. This is known as a blunt-start thread or a higbee cut. A couple of swipes with a 400 grit oilstone knocked the burrs right off and the shaft was cleaned, coated with LPS-3, and packed in vinyl netting until time for assembly. 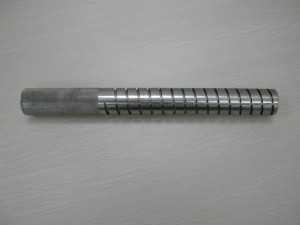