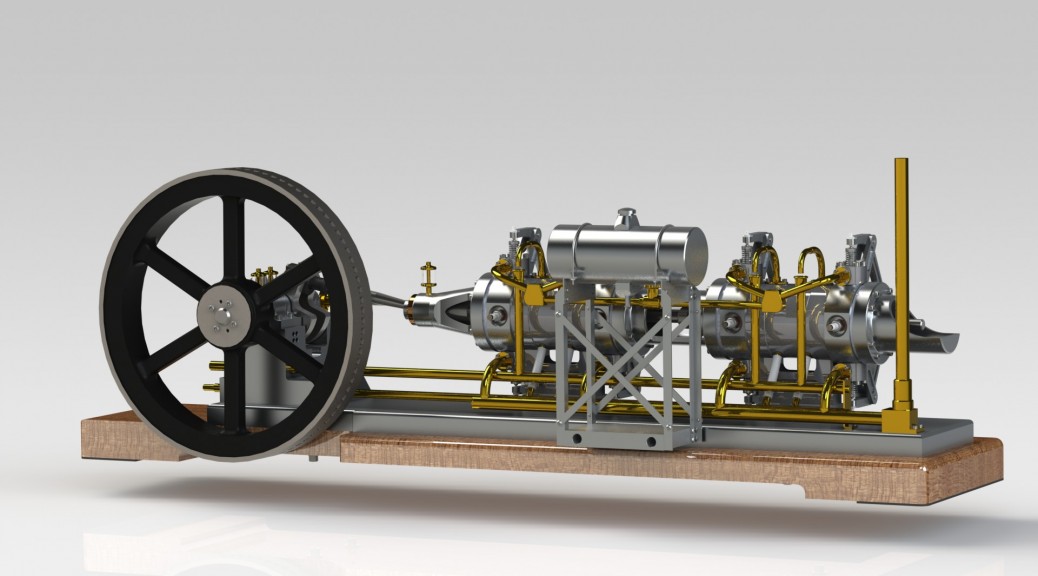 This is the Snow Engine, by Doug Kelly, originally presented in a series of articles in The Home Shop Machinist, and later published as a book, Build the Snow, a Tandem, Double-Acting Engine, ISBN-13 978-941653-41-1, by Village press publications. I’ve modeled it in SolidWorks 2011 and all of the SolidWorks part and assembly files are available for download below. 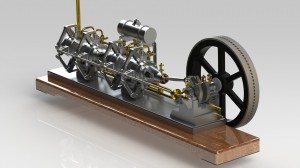 I’ll be revisiting some of the parts before I begin actual construction, but for now the engine is fully modeled as presented in the book, including the coolant tank and centrifugal pump. I did make an initial modification by changing the three-piece side shaft bracket into a single piece. A combination of lathe and mill work should be able to make this easily and this eliminates having to epoxy-on the side pieces.

Here’s a close up of the valve train action. The exhaust valve begins opening at 25° before bottom dead center on the piston. The springs had to be individually modeled in place in order for them to compress and expand, and the cam mates proved problematic. It was easy enough to construct the cam mates, and they appeared to work perfectly when dragging the dynamic components within SolidWorks. The problems cropped up when doing the animations. For some reason the cam mates would arbitrarily reverse tangency at random intervals ruining many hours of already rendered images. This appears to be a known SolidWorks’ bug. 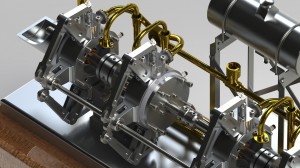 Here you can see what makes this a double-acting engine. The piston is double-sided, and there is a combustion chamber at each end of the piston travel. While one side is drawing in a fresh charge on its intake stroke, the other side has just finished compressing its charge and will soon fire its spark plug. 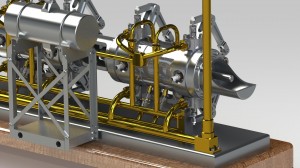 I need to purchase the Satra distributor mentioned in the book as well as a suitable carburetor and get them modeled. When those are finished I will publish updated renderings and part files.

For now you’ll have to make do with these glamour shots. It will probably be a few years until I actually start cutting metal on this engine, but when I do, I’ll be posting a build log like the ones for the Hodgson and Quorn, so keep watch.

All material, including the SolidWorks drawings, relating to the construction of the Snow Engine Model presented on this site is free to use any way you see fit. However, no guarantees are made regarding the accuracy or correctness of the material presented here.

The above assembly files need the following part and sub-assemblies. The parts in the zip archives below are named according to their designations within the book and include only the solid models. If you need dimensioned drawings, purchase the book.

Finally, you can download everything above in one large file. This is a SolidWorks’ “Pack and Go” file: